I was supposed to give a presentation at the one-day meeting ‘Stories Between Art and Science’ in Oporto, Portugal, next week but had to decline because I’m on paternal leave with my youngest daughter in September and October.

Anyway, the programme has just been distributed and it looks tantalising. Speakers include:

I would have loved to hear and discuss at least half of these papers. For obvious reasons, I would have been very interested to hear Shirley Wheeler’s talk, because she curated the ‘Design4Science’ exhibition that we displayed here at Medical Museion in Copenhagen last spring.

But I would particularly have loved to hear Jane Richardson talk about her work on 3D protein structure drawings — Richardson famously developed the now ubiquitous ribbon diagram (a.k.a. Richardson diagram) of protein secondary and tertiary structure models in the 1980s.

This representation of the enzyme subtilisin Carlsberg (Protein Data Bank nr 1c3l) that we are currently displaying in the ‘Primary Substances: Treasures from the History of Protein Research’-exhibition is a nice example of a ribbon diagram: 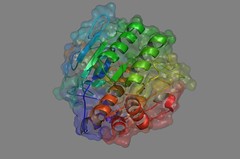 The amino acid sequence is sequentially coloured — from dark blue at the N-terminal end through light blue, green, yellow, orange, and finally red at the C-terminal end. The spiral patterns represent α-helices. The arrows represent parallel β-sheet-forming β-strands in the core of the protein. The thin tubes represent the loops in the structure. The transparent outer layer represents the van der Waals surface, which encloses the molecular volume of the whole protein. (from ‘Protein Substances: Treasures from the History of Protein Research).

Today’s ribbon diagrams are based on graphical display programmes like PyMOL. But when Jane Richardson first developed these diagrams around 1980 she did it in hand-drawing. It would have been great to hear her personal story of the ribbon diagram and the development of this mode of representation, from hand-drawing to computerised design.