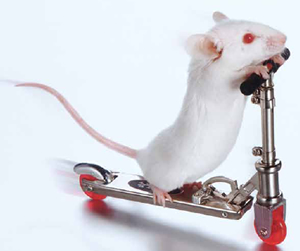 Laboratory equipment for rats or mice have begun to fascinate me more and more. Not in the way the rat guillotine was fascinating, but more in the way of how lab equipment can show so many things about biomedical practices, contexts and knowledge production.

The picture above is from an article in the October issue of The Scientist, which Thomas has referred me to, called ‘Lab Toys – How does cage enrichment affect rodents?’. It is a really interesting article (as he knew I would think) about, well, lab toys – and their consequences for lab practices.

For instance the article illustrates one of the aspects about the use of laboratory animals that you seldom think about: the everyday life in the lab where humans and animals interact. Rats, for example, are not only instrumentalized in an experimental setting but must also, like any other domesticated animals, be cared for and nurtured. And offered toys. As the article describes there is a growing interest and market for this special kind of lab equipment, combined with a growing concern about animal welfare both in public as well as in a biomedical research context.

Another often overlooked aspect (seen from the humanities, at least) about biomedical laboratories that the article shows, is the amount of creativity involved, not only in coming up with new experimental setups, but also in designing facilities for animals. Innovative lab workers apparently do a lot for the well being and the shaping of lab animals’ environment using simple things like cardboard or shreded paper.

The article also had some more critical points about lab toys.

In the 1940s, the famed neuropsychologist Donald Hebb decided to bring home one of his experimental rats, letting it run free in his house and play with his children. The increased variety in the animal’s environment compared to a small bare cage, he found, improved its ability to learn. Psychologists since then have examined the effect of environment on cognitive processes such as learning, fear and addiction.

This and other examples are given to illustrate the fact that the living conditions of lab animals — from materials used for nesting, gnawing or hiding, to temperature and access to other animals — affect their behaviour, stress level, immune system and physical condition. Wheels, gnawsticks and hiding places can therefore in a more or less subtle way influence the results of the experiments the animals are used in.

So if you want to know if your lab’s results are comparable to the results from other labs you have to take these aspects into account and maybe even standardize your lab animals’ living conditions (just like the standardized units, setups or even what you could call standardized mouse like the oncomouse that are used today). As the Dutch researcher Vera Baumans says in the ‘Lab Toys’ article: “The effects of different types of enrichment are often strain-specific and gender-specific, and are even sensitive to the statistical method used in any given study”.

Allthough this is only a relatively small part of the field of modern biomedicine, the living conditions of laboratory animals can, in this way, reflect many of the central aspects constituting the field. One important aspect shown in the lab toys discussion is the way medical sciences attempt to manage complexity by creating controlled lab settings.

But it also becomes clear that the laboratory is a setting for animal and human interaction beyond a simple ‘exploiting the animals’. It is a setting where you cannot separate lab practices from their political and social context — in this case in the form of regulations and concerns for animal welfare. And as the article ends by pointing out, the investment in animal welfare made by Pharma companies like Novo Nordisk can also have a positive effect on the image of these companies as moral entities.

Unfortunately, we don’t have any laboratory toys in the collections of Medical Museion, but they would definitely be items worthy of a museum exhibit. Imagine a rat toy and a rat guillotine next to each other to illustrate some of the paradoxes and themes in recent biomedicine. More lab toys on display, please!