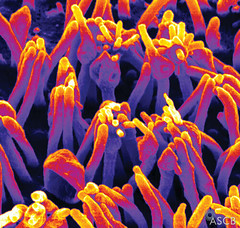 As some of you may have noticed, the online Image & Video Library of The American Society for Cell Biology has been closed since February, and nobody knew whether it would be opened again.

Last Thursday the ACSB announced, however, that the site will be re-opened and developed further by means of a $2,5 million ‘stimulus grant’ from the NIH (one of the consequences of the new Obama administration).

According to ACSB’s press release, the present image and video collection will be turned into “a comprehensive, international digital library” and furthermore, by “developing a systematic protocol for acquiring, reviewing, annotating, and uploading the images”, the ASCB will create “an efficient platform for building the library at a rapid rate”.

These are exciting news for all cell image fans!