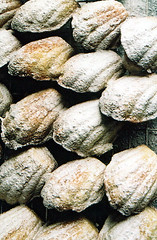 My email inbox is continuously inundated with announcements for workshops, seminars, colloquia, conferences and other kinds of academic gatherings, covering all possible shades of the academic spectrum. Everything of the slightest interest for our job here in the museum gets some attention.

I must admit that over and over again I get a feeling of deja vu (“is there still someone who finds this kind of stuff interesting?”) — but sometimes an announcement pops up on the screen that brings me out of the state of boredom. Like the recent call for papers for a postgrad symposium on ’Mediated Memory: Of Monuments, Machines and Madeleines’ at the University of Glasgow, 29 January next year.

Sponsored by the AHRC‘s current “Beyond Text” programme (!), the symposium is organised in three panels, all of which are highly relevant for museum people interested in visual and material culture.

One deals with ‘monuments’ — the idea being that we memorialise ourselves and our achievements through the production and archiving of material structures and objects, “including architecture, artworks, music, text, museums and archives”. The panel shall investigate the relationship between the construction of memorial objects and modes of remembrance, and “the processes of creating, transmitting, storing and memorialising narratives through objects of memory”. A must-topic for collection curators.

Another panel centers on ‘machines’ in the form of mediating technologies for remembering, such as photography, video, phonography and the Web. The panel will “investigate the effects of the delegation of memory to machines ­technologies in a larger sense ­ upon human experience and its consequences for our personal and public past” (also very museum relevant, of course).

The third panel deals with one of my favourites — ‘madeleines’: “Sights, sounds, smells, tastes, all can transport us instantly”. The panel will explore “how such sensory encounters and chance remembrances inter-relate as well as the wider ways in which unintentional sites of memory participate in the constitution of our lifeworld”. This panel too is a gold mine for museum curators.