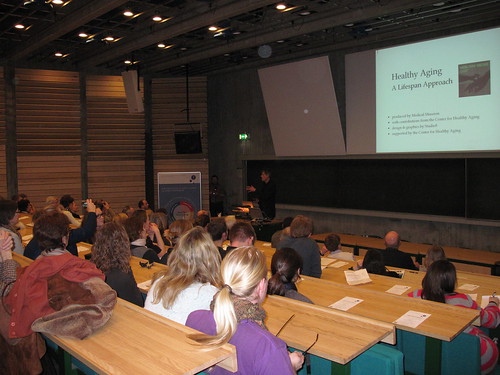 For the record, here’s my introductory words at the opening of our new exhibition, ‘Healthy Aging: A Lifespan Approach’, last Monday:

Last year, the Faculty of Health Sciences established a brand new exhibition area in the main building, paid for by a generous donation from the Kirsten and Freddy Johansen Foundation.

The Dean, Ulla Wewer, asked Medical Museion if we would like to be responsible for setting up a series of exhibitions to represent some of the research done here at the faculty. And we said yes, of course, also because I thought this was a great opportunity for a university museum like ours — not only to get extra exhibition space in the main artery of the faculty, but also to get an opportunity to think about museums and science communication in a more differentiated way.

What I mean is that museums generally think of science communication in terms of broad outreach to the general public. That’s the kind of public outreach we’re practicing in our beautiful old late-18th century museum building in the city area a few kilometers from here. The old building is a site for experimenting with new forms for science communication to the general public. The basic idea is to show how the biomedical sciences permeat our lives and culture at large.

But this new exhibition area in the Faculty’s main building is not primarily intended for the general public. We’re thinking of it as a different kind of museological laboratory — as a site where we can experiment with displays for more professional audiences, and as a testing ground for exhibitions that highlight the aesthetic, cultural and historical dimensions of science. The idea here is to let scientists and students experience how culture permeats science.

The new exhibition area was opened last September with a show called ‘Primary Substances: Treasures from the History of Protein Research’, occasioned by the new big Novo Nordisk Foundation Center for Protein Research. And today we are opening the next temporary show, called ‘Healthy Aging: A Lifespan Approach’, occasioned by the cross-disciplinary Center for Healthy Aging, funded by the Nordea Foundation.

In contrast to the protein exhibition, which needed quite a lot of explanation to make sense, this new show is much more self-explanatory. Generally speaking, museum exhibitions try to strike a balance between three modes of expression — by means of text, by means of visualisation and by means of displaying material artefacts. Sometimes you try to mix these three modes, sometimes you try to separate them. In this show we have gone halfway between mixing and separating.

On the wall panels, we present, mainly through text, how the scientists in the Center for Healthy Aging here at the Faculty understand their work on healthy aging; each of the research programmes in the Center has got its own wall panel.

The showcases along the wall, in contrast, speak about healthy aging in the language of visual art. Three years ago, Medical Museion comissioned photographer Liv Carlé Mortensen to create 15 photo collages of 100 year-old Danish man and women. The result was a unique work of art, which I believe captures — in a beautiful but also somewhat disturbing way — the existential dimension of growing old.

Finally, in the freestanding showcases on the floor, we display (in the third, material, mode) a series of historical artefacts from the museum’s collections that represent four kinds of aids associated with old age – material things that makes old people overcome the deterioration of their bodily functions, things that help them see, hear, chew and walk better.

As usual, an exhibition is not only hard work, it’s also a teamwork. So I want to thank the members of our museum staff — Bente Vinge Pedersen, Ion Meyer, Nanna Gerdes, Jonas Paludan, Camilla Undén and Jacob Kjærgård — for selecting, preparing and handling the artefacts. We are also very grateful to Mikael Thorsted for his design work and to Lars Møller Nielsen for the graphic design. And finally thanks to the team-leaders in the Center for Healthy Aging for providing information about their research programmes, to the Director of the Center, Lene Juel Rasmussen, for economic support, and not least to the Center’s administrator, Tina Gottlieb – it was Tina, who originally came up with the idea that we could take today’s event as an occasion to show Liv Carlé Mortensens photo collages of centenarians to students and staff here at the faculty.