Will this become the abstract of the 2010s?

We report the design, synthesis, and assembly of the 1.08-Mbp Mycoplasma mycoides JCVI-syn1.0 genome starting from digitized genome sequence information and its transplantation into a Mycoplasma capricolum recipient cell to create new Mycoplasma mycoides cells that are controlled only by the synthetic chromosome. The only DNA in the cells is the designed synthetic DNA sequence, including “watermark” sequences and other designed gene deletions and polymorphisms, and mutations acquired during the building process. The new cells have expected phenotypic properties and are capable of continuous self-replication.

From Gibson et. al., “Creation of a Bacterial Cell Controlled by a Chemically Synthesized Genome” in today’s issue of Science. Et al. in this case of course includes Craig Venter, who has now made an important step towards synthetic life. 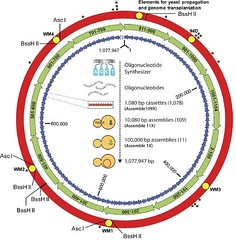 It’s not really synthetic life yet— it’s ‘just’ a synthetic genome, which has been designed in the computer, assembled from chemically synthesised oligonucelotides, and then put into a recipient cell, where the new synthetic genome took over control, thereby creating a new Mycoplasma species. Nevertheless — it’s pretty mindblowing.

In this video, Venter shortly explains the work behind the paper, and then discusses the many possible applications, including vaccine production. He predicts, for example, that the production of flu vaccine can be speeded up considerably, making it both cheaper, more reliable, and more on-demand.

Tons of ethical, religious, environmental etc. issues will of course be raised in the wake of this.