Is the challenge of botanical poetry lost forever in Copenhagen? ‘An Ageing World’ — a science-design installation about global demography

XVIVO’s ‘Powering the Cell: Mitochondria’ — the magic of ‘The Inner Life of the Cell’ has evaporated

Back in 2006, I, for one, was unreservedly enthusiastic (here) about XVIVO‘s animated ‘The Inner Life of the Cell’. Originally made for use in undergraduate life science teaching at Harvard, it became immensely popular on the internet. It was magic — as  Jim Endersby said , it was like “Terminator 2 meets a biology textbook”. 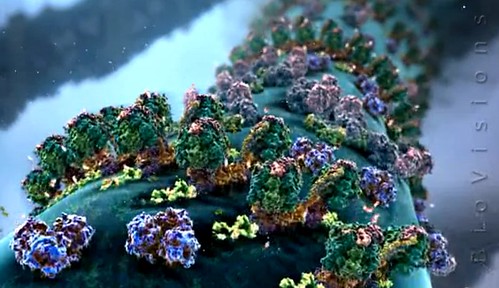 Since then we have eagerly waited for Terminator 3. And now the sequel has arrived — a four and a half minute animation, titled ‘Powering the Cell: Mitochondria’, showing the production of ATP.

But I cannot recall the original enthusiasm I felt about ‘The Inner Life of the Cell’. The magic has evaporated. This is just another didactic animation movie.