We have cake and talk about diabetes 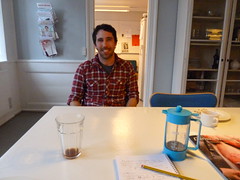 I had coffee and cake with our new PhD Adrian Bertoli the other day. Adrian is going to work with the relationship between type-2-diabetes and patient identity throughout the last 50 years, with Thomas as supervisor. Adrian’s project is financed by the cross-disciplinary Center for Healthy Ageing at Copenhagen University.

Knowledge about an illness is traditionally communicated directly from the doctor (the source) to the patient (the receiver). Adrian told me that he will look into how contemporary patient groups and social media on the internet make this kind of knowledge more accessible.

Adrian is originally from Canada and when he arrived in Copenhagen a Danish network for foreign researchers in Denmark received him. They offered him a course in understanding the Danes, whom many foreigners experience to be somewhat closed and unwelcoming.

But in spite of freezing weather conditions and warnings about the Danes, Adrian feels at home here. Only a month after his arrival he was asked to give his first lecture in a course, and at the moment he holds an important post in the Medical Museion’s Christmas Party Committee.