Two weeks ago, friends and colleagues alerted me to Horace Freeland Judson’s recent death. I was amazed to hear he had already reached the age of 80. But then again, 20 years have gone since we first met in 1991-92.
Horace had received a major grant from the Mellon Foundation to write a history of immunology, and advertised for postdocs to do the basic research. I had finished my PhD a few years earlier and had just begun the preliminary archival work and interviews for my biography of Niels K. Jerne. What an opportunity to spend a year at Stanford doing research for my next book! I applied for the job and went to Baltimore in July 1991 for an interview at Horace’s homeplace. 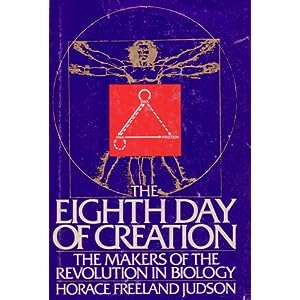 I was duly impressed, both of the fact he had won a MacArthur Fellowship a few years earlier and of the magnificent palais he and Penny had bought on University Drive. I also thought quite highly of his magnum opus on the history of early molecular biology, The Eighth Day of Creation (1979), because it was so extremely well written and because he had made extensive interviews with most of the major players. His cosy relationship with Francis Crick loomed large in the book.
I immediately accepted Horace’s offer to spend a postdoc year at Stanford and so did Nic Rasmussen (now at University of New South Wales) and Craig Stillwell (now at Southern Oregon University). But with some trepidation. Most young and ambitious historians of science at the time were put-off by the fact that Horace wasn’t a professional historian of science (he never earned a Phd), but a ‘simple’ journalist with a bachelor’s degree. His had no interest in historical theory and method, he didn’t like philosophy of science and despised all kinds of science studies. We considered him a skilled but atavistic amateur.

When we arrived, we were told that the reason the project was placed at Stanford was that historians of science and medicine at Johns Hopkins hadn’t wished to host Horace, and that Stanford had welcomed him only because of the substantial overhead. I don’t know if this was true, but the Stanford Program in History Science faculty indeed kept him at arm’s length. Partly this was a matter of academic snobbery from the side of Peter Galison and Tim Lenoir and their students, but Horace’s vanity, mannerisms, and habit of addressing people in a magisterial, and sometimes even condescending, voice most probably added to the mutual dislike.
Yet Horace was a MacArthur ‘genius award’ recipient who had rubbed shoulders with almost everyone of importance in early molecular biology. And he wrote damn readable texts, much better than most historians of science could ever dream of. Horace was a very intelligent man, who thought highly of science and quickly absorbed the essentials of molecular biology. He had been a fellow bachelor student with Matthew Meselsohn (of Meselsohn and Stahl experiment fame) in Chicago and had met Max Perutz in England when working for Time Magazine in the late 1960s. Through Perutz he got acquainted with Francis Crick, and that’s how The Eighth Day of Creation started — indeed literally started: the opening lines about how he’s walking down the street with Crick is one of the most famous show-off anecdotes in the history of science.
During our initial discussions, Nic, Craig and I rapidly realised that Horace had received the Mellon grant to follow up on his DNA-story masterpiece with a sequel on the history of contemporary immunology. We knew this was an impossible project. Postwar immunology doesn’t have the same simple storyline as molecular biology. There is no overarching discovery story (like the double helix), no main central actors (like Watson and Crick). Postwar immunology is a historiographical mess, which is complicated even more by the intricate relations between basic immunology and clinical science.

As a consequence, Horace’s magnificent idea ended with a torso. Nic, Craig and I published quite a few papers — but there never came a book from Horace’s hands. His next grand scheme, the Center for History of Recent Science at the George Washington University, received an initial grant for five years but then collapsed because of lack of funding. And his planned book on the Baltimore affair was scooped by Dan Kevles (The Baltimore case, 1998), forcing him to produce a much less spectacular book (The Great Betrayal: Fraud in Science, 2004) than originally conceived.
It’s easy to pass over Horace Judson as a vain, pompous, gossipy, self-absorbed person who happened to write one single successful book, followed by decades of barrenness. But those of us who came close to him saw another side. Whereas too many academics are selfish, aspergeric and nasty behind their smiling and convivial personas, Horace was the other way around. Despite his superficial vices, he could be a very generous person: he would spend hours and days reading and commenting on people’s writings and several of my colleagues testified to how much they’ve learned from his writing skills.
Horace was a deeply troubled man, whose bitterness increased after Penny’s much too early sudden death in pneumonia in the mid-1990s, but he could also be quite endearing and empathetic. I’ll never forget how, when my then wife arrived in the winter of 1992, she was neglected by everyone except Horace, who sent over a huge basket with fruit, cakes and a bottle of champagne on the night of her arrival (“she needs it after a 16 hour long transatlantic flight”, he said). He could have added that life needs to be lived with style.
All this is anecdotal history now. The bottom line is that Horace Freeland Judson wrote one of the most readable and insightful books so far published about the history of mid-20th century science. For this he will long be remembered.
(Read also Nathaniel Comfort’s eulogy on Horace Judson here; we discovered by chance yesterday that we were writing in parallell and decided to post simultaneously today).