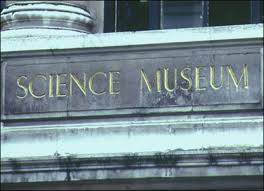 I was in London last week to attend a workshop organised by Robert Bud and the medical curatorial staff at London’s Science Museum.
They had invited some 20 people from a variety of academic backgrounds to discuss the future redevelopment of their medical galleries.
The day before the workshop we prepared ourselves by a guided tour to the present medical galleries:

All these galleries are very impressive, of course, like everything the Science Museum does. They are extremely object-rich — containing almost every significant medical scientific and technological artefact from ancioent times to the late 20th century, mostly things collected when Britain was a leading imperial scientific and technological power — and very skilfully curated. But they are also (sorry to have to say this!) pretty boringly designed. British science, technology and medical museums have not been famous for their approach to exhibition design, and although not as badly designed as most of their American counterparts, the Science Museum galleries clearly need an overhaul in this respect.
In my view, it’s difficult to think about the content of museum galleries isolated from their design. Marshall McLuhan‘s famous slogan ‘The medium is the message’ may be a gross exaggeration, but it’s at its truest when applied to museum exhibitions.
In this meeting, however, design questions were almost absent. The academic group around the table included medical historians, general historians, scientists, and a few science communication people, but few exhibition curators (unless yours truly could be classified as one :-).
The planning group’s initial ideas about the future medical galleries focused on content too, with a strong bias towards the history of medicine. In their view, the future galleries will be based on “a broad definition of medicine”, be “global in scope”, and “feature a better balance of stories relating to mental and physical health”, and they “will feature a plurality of voices and perspectives” and continue to utilise “a chronological classification but introduce more thematic approaches”. Furthermore they will use the history of medicine website to “engage audiences with our collections in an encyclopaedic way” and finally what they call “Public history [i.e., participation in a broad sense] will play and integral part within the gallery development process” (quoted from Science Museum material distributed before the meeting).
Based on this general frame for the future galleries, the planning goup asked us to discuss a number of questions, like:

To what extent should we continue with a chronological structure? What are the strengths or weaknesses of such an approach?
To what extent might we adopt a thematic structure? Incorporating broad taxonomies such as Trust, Belief, Evidence and Practice, Controversies and Orthodoxies, Infectious disease, Chronic illness, War and Accidents?
Should future galleries be broadly shaped around our encyclopaedic collections or should they be more directed by people and stories?
Should extensive collecting – particularly of contemporary material – play a significant role in guiding the development of the new galleries?
How ‘global’ can we really aspire to be? What should the place of non-western medical/healing traditions be within the future galleries?
Should we characterise biomedicine as one tradition alongside others?
What weighting should be given to the presentation in the Science Museum of ‘the history’, ‘the contemporary’ and ‘the future’ of health and medicine?
What extent of coverage should we give to more contemporary medical practices (ie post-War to now) and how should it be represented?
Should concepts of ‘health’ sit at the foreground or be more in the background of the medicine galleries?
Where do we want to draw the boundaries between ‘health’ and ’medicine’?
To what extent should future displays consciously foreground the history of its collections – specifically the act and intention of collecting and representing medicine?

All in all, great questions, which all medical museums ought to answer before they embark on new galleries.
Unfortunately, I cannot relate the discussions in any objective way. But I posted a stream of Twitter posts (see here, scroll down to 30 June), which reflect my immediate impressions as the round-table developed in the course of the day. I will return to these impressions in later posts.
Thanks Robert et al. for a very inspirational meeting!